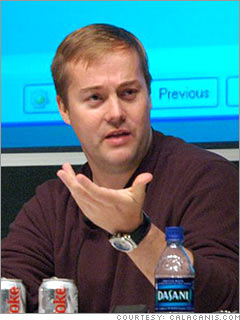 He’s a classic Silicon Valley entrepreneur. He started several major websites, including Silicon Alley Reporter and Weblogs, and is currently running Mahalo, which is a sort of hybrid Google/Wikipedia site.

I first heard Jason Calacanisâ€”literally, heardâ€”when he was a guest on This Week in Tech, a tech audio podcast. He was completely confident, and opinionated, and threw out extremely opinions.

And this ticked people off.

Now, he wouldn’t attack people directly (except when clearly in fun), and he made clear that he’s been wrong before. He was also playful with his status as Silicon Alley , joking about his ability to buy things and such. But he was definitely certain of his beliefs, and dismissive of other opinions. Which he certainly has the right to be.

And, again, this offended people.

I discovered that Calacanis is rather infamous online. Apparently, people can’t stand the fact that he has strong opinions.

It’d be one thing if he were nasty. He’s just opinionated. Doesn’t he have the right to be?

Anyway. He did something interesting a few months ago: he stopped blogging, and set up an email list. Instead of blogging to the internet, he sends an email to a relatively small group of people (750).

He pointed out that pressure from other bloggers, debates on TechMeme, accusations and comment hate, just became too distracting. As he put it, “Today the blogosphere is so charged, so polarized, and so filled with haters hating that it’s simply not worth it. I’d rather watch from the sidelines and be involved in a smaller, more personal, conversation.”

And today he posted a long, detailed entry to his email list about his decision to lay off a few people at Mahalo. He explained all of his reasons with clarity and honesty, and described the actual layoff process and what he’s learned from laying folks off over the years.

It’s an honest, insightful post, and I think it benefits from being sent to a “safe” group of people who’ve actively signed up to hear what he has to say. It changes the nature of the content, in a good way.

If you want to sign up for Jason’s list, head over to his email list page. It may take you a while to get in, as you have to wait for a slot to open. But I think it’s worth it.