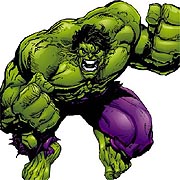 As mentioned previously, I saw Hulk Sunday night. I liked it a lot.

I loved Ang Lee’s direction. There’s a lot of subtle directing in the film, from spacious wide shots to claustrophobic scenes of characters pacing and cogitating. Lee knows exactly what he’s doing and how to get across a particular mood.

He’s also inventive with his use of “comic book panels;” the screen will occasionally divide into multiple panels, each of which shows something different. This is usually used when there’s a lot happening at once, or the action is complex, so you can see the action from multiple angles. Once, though, it’s used to convey a lot of information at once; we see the same scene from three different perspectives, and we see two characters’ eyes meet in a way that would be much more jarring if it were intercut.

The movie also does an excellent job of pacing out the Hulk’s appearances; rather than have him go on a rampage for ten minutes, he busts up in relatively short bursts throughout the film. This is good; otherwise the film would’ve been incredibly boring as it lead up to that rampage. As it was, the first third or so of the film was almost too slow.

The actors all put in excellent performances. Eric Bana as Bruce Banner managed to act like a severely emotionally repressed man, which is quite a job. Nick Nolte stole every scene he was in. And I love Jennifer Connelly. There’s something about her acting style that’s always clicked with me, that I respond to on some deep level, going all the way back to Labyrinth. My only complaint was Josh Lucas’ Talbot, who was a painfully villain.

And I thought that the Hulk himself looked good. Some have complained that he looked weird, but as another reviewer put it, what else would a huge green monster look like?