Does An American Tail Still Hold Up? 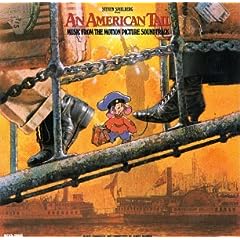 It’s Friday, review day, and I’m going to talk about a very special movie for me. A formative movie.

I watched An American Tail when it was first released in theaters in 1986. I was ten years old. I was enthralled, and still remember the visceral thrill of several sequences: the storm on the ship, the singing of “Somewhere Out There,” and the dockside cat chasing scene.

You probably all know I’m an anime fan. Well, that’s part of my larger interest in animation itself. I watched with fascination several discs of weird Russian animated films and shorts, and have watched animated shorts from all over the world. Animation just fascinates me.

And I think I can track it all back to An American Tail.

I re-watched it recently. That’s always quite an experience, returning to a childhood favorite with the cold reasoning of an adult.

The story falls apart. There’s very little connective tissue to link one scene to another; the entire movie almost feels like an excuse to put half a dozen intense sequences on screen.

But those sequences are intense, and I’d put three of them on par with anything Disney or Miyazaki’s ever done: the storm at sea, in which Fievel confronts a storm sweeping across the deck of the ship; the dockside cat chase, with its desperate scrambling to fire off a huge mechanical contraption; and the final search for Fievel, an amazingly quiet scene of an emotionally demolished boy.

The first two scenes are frenetic and powerful, with bold but careful uses of color and movement. Neither scene ever confused me; instead, they presented a lot of action, going in what seemed like ten directions at once.

And it sold me on its protagonist. Fievel wasn’t just a boy in danger; it was a boy lost in a wondrous but confusing place. The genius of the premise lay in the fact that he wasn’t attacked by cats at every turn (any more than the entire mice population). He was just…orphaned.

And I loved its representation of turn-of-the-20th-century New York (and America in general): amazing, ruthless, hectic, and truly a land of opportunity. Flawed, certainly; there are sweatshops, discrimination, and a classically crooked politician (not evil, just completely crooked).

But it quickly becomes home for the characters. Despite all its flaws, despite the tragedy of the story, America still represents great potential.

And it’s saying a lot that I believe this despite the flaws in the story. The movie can be difficult to follow at times, but it gets across deeper things. Which is more than most works of art can say.

I’m certainly glad I re-watched it. It’s usually worthwhile to track down those old gems of childhood, if just to re-experience them.