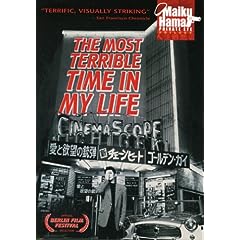 So imagine a Japanese film, set in the 1960’s, involving a down-and-out Japanese private investigator named Maiku Hamma (“My real name,” he says), who takes a missing-person case and winds up in the middle of a yakuza/triad turf war. He drives a convertible, wears a samurai-style jacket, and has an shoebox-sized office over a movie theater (you have to buy a ticket for the latest movie just to go up to see him).

It exists. It’s called The Most Terrible Time In My Life.

The director, Kaizo Hayashi, was obviously influenced by French New Wave, American noir, samurai, and yakuza films. Everything’s in black-and-white (almost), the characters are almost all tense (or hiding something, or both), and there’s even a brief scene with Maiku’s “mentor,” who wears a white suit and uses a cane.

(If you’re a die-hard MST3K fan, you’ll be tickled to learn that the aforementioned white-suited mentor is played by the thick-jowled spaceship captain from “Star Force: Fugitive Alien” and “Fugitive Alien II,” he of the maniacal laughter followed by “You’re stuck here!”)

See, this movie should be a terrible mess. This should be confusing. Instead, while the film certainly has its flaws, all of these elements work together.

Why? Because the director’s influenced by all those disparate film styles; he’s not trying to make a film that embodies all of them. He uses those styles to create effective scenes. They’re all tools.

The result is a remarkably entertaining film. It starts out as simply great fun, then grows increasingly dark and brooding as the various plotlines accelerate towards the (inevitably bloody) end. Which is exactly as it should be for this sort of film. As long as you aren’t expecting a mindless, high-speed action flick—Japanese movies rarely are—you’ll probably get it.

And you’ll find a weird, wonderful little gem. I can’t wait to see the sequel.