Why You Should Watch Mobile Suit Gundam

This is intended to be the first of a  series where I write about each major animated work in the Gundam universe. I want people to know what each of these shows has to offer.

About spoilers: I won’t tell you who dies, but this is a review of a 30- show, for Pete’s sake. Anything I write about here has long since been analyzed on 2ch.

Mobile Suit Gundam, of course, is where it all began. The first Gundam show, which aired in 1979.

And that is the key aspect in appreciating this series. Mobile Suit Gundam (MSG) must be understood in its historical context. Before MSG, anime was aimed squarely at  and tweens. There was no anime aimed at teens or adults, except maybe Go Nagai’s cheesy giant robot shows, depending on how you squint at them.

Mobile Suit Gundam was aimed at , as evidenced by its 15- protagonist (in most anime series, the protagonist is the same age as the target viewer). Heck, the only characters younger than that are the comic relief orphan children.

(Only in Gundam do you have comic relief orphan children.)

MSG also strove for realism. In previous mecha series, the titular giant robots almost always had ridiculous backstoriesâ€”designed and built by a single scientist, usually. Transformation sequences often made no sense; the vehicles that made up Getter Robo melt together to form the giant robot.

Not so in MSG. There’s certainly a magic technologyâ€”there has to be for giant robots to be practicalâ€”but it’s placed on a different level, behind that of the giant robots. MSG introduced Minovsky particles, an otherwise undiscovered element that makes compact fusion drives possible and jams radar. This makes combat critical, especially for large vehicles. And when one side adapted the  construction machines originally used for colony construction into fearsome humanoid war machines, they suddenly found themselves with an ideal war technology for space combat.

This is what you get in great science fictionâ€”the magic technology suggests technological innovations and historical responses.

The two sides of MSG‘s conflict also stand out. The Earth Federationâ€”the “good guys”â€”is simply Earth’s government. It’s not particularly noble or just; in fact, it’s portrayed as bureaucratic and behind the times of modern warfare. The Principality of Zeonâ€”the “bad guys”â€”objected to Earth’s control of a fundamentally new civilization in space, and declared independence. Not only are several Zeon characters sympathetic and noble, one of them became one of the most popular anime characters of all time, Char Aznable1.

Side note: Most folks see the  uniforms of Zeon and read that Gundam’s creator, Yoshiyuki Tomino, wanted MSG to feel like the German offensive in World War II, and call Zeon simple for Nazis. Saalon and I disagree. Zeon is much more similar to Japan in WW2; motivated by a zeal for independence against an economic powerhouse that they see as oppressive. While I’m sure Tomino originally intended Zeon to be like the Germans, I think he ended up creating Japanese. While the  Zeon nobility are clearly , most of the other Zeon characters are portrayed as soldiers doing what they think is right.2 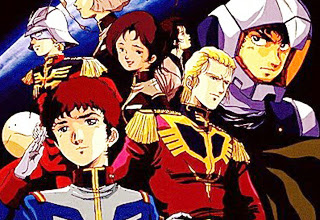 Characters, too, elevate MSG above other anime of the time. I can list four main characters who behave significantly differently by the end of the series. And others explicitly don’t change, to their detriment. I can’t think of any other anime with that much character change.

And those characters! A few highlights:

How can you not be intrigued by these people?

MSG accomplishes so much, especially in 43 episodes in an era when most anime had the barest thread of a story arc over the course of 50-odd episodes. Characters evolve (and some die), technology changes, and the war builds up to a fever pitch. Heck, the unexpected early cancellation of the series helped it, as the show focused on its end game for the last six episodes, and drove straight for it at full speed.

I distinctly remember watching a sequence about through the show, in which the narrator explains the current Federation offensive against a major Zeon supply base. There’s a shot of White Base, followed by a shot of General Revil debating strategy options. I suddenly realized: I understand the overall course of the war, and the characters’ exact strategic role in that war, and I know what the characters are going through (and they’re going through a lot). I’ve seen this show only once (plus the recap movies), and I just turned to one side and rattled off the names of fifteen major characters. I know them that well. I literally can’t think of any other anime that accomplishes this much; even later Gundam series sacrifice one of these levels of detail.

Downsides? In 1979, the Japanese still hadn’t wrapped their heads (or their drawing hands) around fluid 2D animation. MSG can be painful to watch, unless you’ve seen a lot of  cartoons.

It’s also uneven. Tomino felt compelled to include a mobile suit fight in every episode, and at times they feel unnecessary.

But it’s worth it. Oh, it’s worth it, if just for the experience of this futuristic war story, and the great characters you’ll meet, and the choices they face.

1 Char’s popularity is according to polls in Newtype magazine, which consistently put Char Aznable in the Top 20 list of most popular anime characters.

2 See Of Space Nazis, Gundam Sequels and the Horribly Underated MS Igloo for an excellent analysis of the Nazi design aesthetic in Gundam.