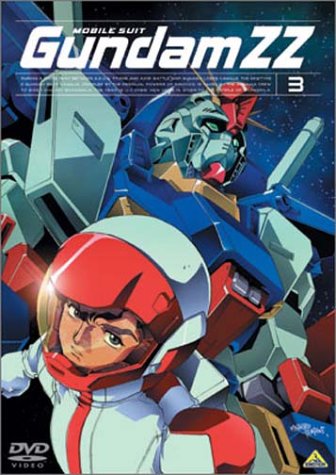 Spoilers are hardest in this review. My enjoyment of this show hinges on several characters and plot points that reference the previous show. So, the first part of this review has no spoilers, and the last half will be clearly marked as spoiler territory so I can explain my love.

I’ve enjoyed every Gundam series I’ve seen. Each is fun in its own way, of course; Gundam spans a surprising variety of philosophies and tones.

While I enjoyed ZZ Gundam, it’s the most difficult for me to recommend. It doesn’t fit traditional categories of worth or enjoyment. It starts out lighthearted, more in the vein of an adventure show for tweens. The protagonists exhibit minimal angst or emotional problems; they basically go on weird adventures for the first half-dozen episodes. Then, halfway through, the show delivers possibly my favorite episode in Gundam; it gets serious and dramatic and downright painful, which the show returns to frequently throughout its second half.

But that’s not to say that ZZ Gundam starts goofy and turns serious. It’s a trend. It’s fun throughout; there are just more serious moments in the latter half.

The show begins literally hours after the final moments of Zeta Gundam. The main ship limps into port at Side 1, and gets involved with a group of rough-and-tumble teens, who become the protagonists of the show.

And it is odd. We basically watch these kids stumble around for a good chunk of the show. They’re no big fans of the Federation. The central pilot, Judau, is a typical passionate shonen teen, full of bravado. His friends are also similar shonen characters. In fact, not long into the show, Judau’s sister falls into the hands of Neo-Zeon, and I think this was the only way to keep Judau and the others fighting.

Then, halfway through the show, Judau finally re-unites with his kidnapped sister. Briefly.

He finds his way into a Neo-Zeon stronghold and grabs his kidnapped sister. Guards open fire, and a shot hits his sister in her side. They escape, Judau hiding his sister in a nearby hut while he returns to his Gundam to fight off the Neo Zeon forces chasing them. Judau then takes out a mecha which crashes directly on his sister’s hut, which explodes in fire and metal scrap. Judau lands, unable to believe she’s dead, and paws through the wreckage while the ten-year-old girl he rescued earlier drags at his arm, crying, “I’ll be your little sister from now on.” At which point he turns and slaps her across the face. And she collapes in a crying heap.

It’s an episode of pain and pathos. Perfectly done. It works.

Which is a relief because ZZ is a mess. It’s a jumble of drama and comedy, of laughable villains and stock protagonists. But when it starts to fire on all cylinders, it barrels along with an intensity rarely matched in any other Gundam show before the turn of the millenium.

One of my favorite aspects of this comes in the form of Kamille Bidan, the protagonist of Zeta Gundam. He appears in ZZ, still a shattered, catatonic shell after the events of Zeta. In an episode about two thirds of the way through ZZ, the characters end up in the same city where he’s recovering in the hospital. He now shifts uncomfortably in his coma.

During an episode involving at least four Newtypes (people who’ve developed mild psychic powers), Kamille leaps to his feet and runs from the hospital, still incoherent and unable to recognize even his girlfriend. He flees down the coast to observe the battle which he can clearly sense.

The battle rages on, the pilots fighting on multiple fronts, separated and searching for one another. Suddenly, a voice speaks in their heads, calmly informing them of each others’ whereabouts and situations. We cut down to the beach, and Kamille sits there, staring at the flickering lights of battle overhead. You know he was the one speaking. You know he’s okay, somewhere in his head.

Especially after the emotionally exhausting end of Zeta, to see that Kamille is on the mend and would be okay is a huge relief.

An odd thing to mention, perhaps, in a review of ZZ–the treatment of a character from a different show. But it shows just how sensitive Tomino is to his characters and his audience. He knows who we care about. Of course, it also says something about how little I ended up being emotionally involved in the actual protagonists of ZZ.

And the characters are what make ZZ work, in the end. There’s a big battle at the end, of course, and despite the muddy execution, I felt good about who fought whom, and who won. It also has possibly my favorite death in Gundam, mainly because of the poetic justice of it all. Again, this is Tomino knowing how to treat his characters right.

Overall? The show is as muddy as this review. There are plenty of things to dislike about it. But, despite that, I enjoyed ZZ, I’m glad I watched it, and I wouldn’t mind watching it again. There’s some good stuff here.